Situated on the Isle of Sheppey, Kent, Minster WMC serves a large and diverse community in a populated area on the historic north coast of Kent. The club acts as a focus for a wide range of local social organisations, which offers superb bar and catering facilities for members as well as visiting parties. Although the area has suffered from the closure of the Corus Steelworks, Minster continues to thrive and remains at the heart of community life.

Like most clubs, Minster found it increasingly challenging to run a financially effective business and the closure of the Corus steel works in 2012 certainly did not help. It was obvious the club needed more effective management systems, yet their existing EPoS system was unreliable, lacked proper controls, offered no details about customer purchases and had no option for encouraging customer loyalty.

Minster’s club manager Ray Seager contacted Open Solutions, developers of the leading EPoS and loyalty card system. Already used in over 200 members’ clubs, the system had a proven record of increasing bar turnover and improving a club’s cash flow by encouraging members to pre-load funds into a personal account in return for discounts at the bar.

When launched in October 2012, members were issued with their personal loyalty cards (funded and sponsored by a local firm) and invited to load funds into their account in return for a discounted price rate at the bar. Within a few weeks, the club had received over £5,000 in pre-payments and turnover had increased by 25% in just three months.

The innovative EPoS system gave Seager another major way to improve margins: differential pricing or in other words, discounted prices for members, and standard RRP for visitors. In return for their cooperation in taking up their bar cards and placing money in their club bar accounts, every member was given an 11% discount, and several years on, this is still one of the reasons Minster’s membership enjoys the club.

Seager said at the time:

“The Open Solutions’ EPoS till system is a much faster and more secure solution. It was really simple for the operators to learn and equally easy for management to get the required reports. Open Solutions’ staff were very efficient throughout the installation and gave us excellent training and support.”

He continued: “The members are delighted with our new scheme because it makes things far more convenient for them, and they love the fact that they do not have to carry cash with them when they visit the club. I personally believe this type of initiative would work well for most clubs, both large and small, and make a positive difference to a club’s cash-flow and on-going sales revenue."

Originally cash flow improved dramatically with some £5,000 available to the club via the members’ deposits. Five years later the club’s cash flow position has improved even further with over £9,000 held on the card balances by the club.

Income from non-member functions is now around 33% of the total income, and in turn that also represents a regular boost to the sales margins based on full RRP, and improved overall profitability. As Seager puts it: “I wish the club’s committee had agreed to install this system when it was first proposed back in 2010! Now, the benefits have shown themselves to be entirely sustainable, and the club prospers despite local market conditions depressing demand.”

“I’d certainly recommend the Open Solutions EPoS & Membership system to any other club. I’ve shown it to two others who have gone ahead and installed it, and in retrospect I can safely say it’s the best thing we’ve ever done.” 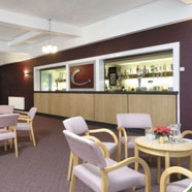 " This has certainly helped strengthen our margins, and created a very good incentive for membership. It’s a fantastic business and management tool for us."

For more information about any of our services, please complete our short enquiry form below, and one of our experienced team will contact you.
Alternatively call 01926 350350 to speak to someone now or email tammy@intelligentgolf.co.uk

* Required fields. Please note your personal information will not be shared with third parties.